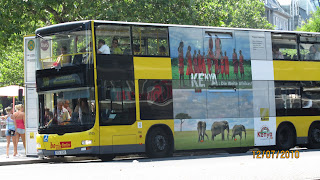 Recently while in Berlin City for holiday, I was surprised to notice a big Kenyan tourism billboard Ad on the side of one of a Berlin public transport bus. Before I could point my digital camera for a picture, the bus zoomed away. However, on the last day of my stay in the City, the bus with the billboard Ad stopped just close to where I stood. This time round my camera was handy and I took the picture above which I wish to share with you.

The reason for sharing this is first to commend those behind the Ad for a good job. Secondly, it filled me with pride to see the Ad. Such is the positive image of our country one likes to see in foreign countries. Those concerned ought to extend the project to other cities in Europe.
Lagt inn av Dr. Stephen Kabera Karanja kl. 23:55 17 comments: