New Chief Justice Sworn In Office: Signifies a Break With the Past 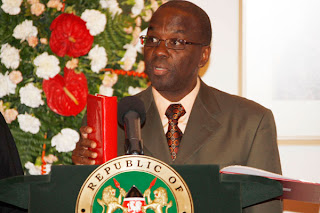 It did not escape the eyes of keen observers that the swearing in of Dr Willy Mutunga as the new Chief Justice was not ordinary. Mutunga did not wear the traditional red robe worn by the Chief Justice and puisne judges during the swearing in celemony. As explained by a spokesman of the Judiciary, Mutunga avoided the robe to signify a break with the past. This could also mean the end of the era of the robe as a judiciary attire. The robe is a relict tradition inherited from the British colonial administration.

Mutunga also promised to uphold the rule of law when he said he wants to build a judiciary where the high and low are equal before the law. In the same breath, he vowed to protect the independence of the judiciary while respecting the other arms of the government: the Parliament and the Excutive. 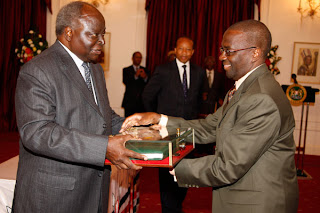 Congratulations Dr Mutunga and may the New Dawn shine over the Judiciary.

Edited version of the speech Dr Willy Mutunga gave after being sworn in at State House, Nairobi on June 20, 2011

Mr President, Mr Prime Minister, Mr Vice‐President, the Speaker of the National Assembly, this is an important day and event in the history of this country.

A Chief Justice of the Republic of Kenya assumes office not just with the endorsement of all three arms of government but perhaps more significantly, with the direct participation of the public.
It is a mandate I don’t take lightly and neither should you.

This is because the Constitution is very clear that judicial authority, just like the Executive and the Legislature, are derived from the people and should be exercised for their benefit and welfare.

The nature of my mandate gives me confidence and responsibility. Guided by the Constitution and without fear or favour, it is a responsibility I seek to discharge to my best ability and intellect. This country must uphold the rule of law without equivocation and as I assume the leadership of theJudiciary, the words of an earlier philosopher ring clearly in my mind: Be ye so high, the law is above you.

This is the Judiciary I want to create — it is the true article of faith that I want to bring to the Judiciary where the high and low are equal before the law. The success of my tenure, the Judiciary and our democracy will depend on how the three arms of government relate and operate.

In this regard I seek your support even as I offer mine. This is because justice is an assembly line and the determinants of justice numerous. To meet the ends of justice, the Judiciary will depend on the competence and integrity of other institutions.

I urge both the Executive and Legislature to ensure we have investigatory, prosecutorial and penal institutions robust in their design and operation: clean and incorruptible in their leadership.
Lagt inn av Dr. Stephen Kabera Karanja kl. 01:08 No comments:

Supreme Court Nominees: A Mixture of Continuity and Transformation

The choice of the nominees has been hailed as a mixture of expertise, gender and regional diversity. The combination of sitting judges and outsiders also represents continuity and transformation. The panel brings in different legal ideologies and philosophies. The chief Justice and the Deputy Chief Justice are hailed as liberals, Justice Ojwang and Tunoi as conservatives and Wanjala, Ndungu and Ibrahim as centralists. In addition, the judges bring in their experience from the Bench, Smokin Wanjala and Njoki Ndungu research, willy Mutunga research and activism and Nancy Barasa activism and management.

Given this line up, the public expectation of the Court is high. The Court's role as stipulated in the Constitution involves arbitrating over disputes arising out of presidential elections, determining appeals from the Court of Appeal, and to interpreting the constitutionality of issues arising from proceedings in subordinate courts. The current Court of Appeal as the final Court suffered from a reputation of conservatism and rigidity. The composition of the nominees to the Supreme Court can be seen as an invitation of the Court to expand the horizons of jurisprudence in its interpretation of the law. Whether the new breed of judges will inject the necessary activism and progressiveness in the Courts decisions is to yet to be seen.

The significance of the Supreme Court also lies in the fact that it's the final resort of justice. Its formation offers Kenyans a new higher rank in the hierarchy of Courts where they can appeal for justice. For the first time also, the highest court will be occupied not by political appointees whose sense of justice may be skewed in favor of the appointing authority but by men and women whose integrity, credibility and competence has been tested and challenged in public and transparent vetting processes. When approved and appointed into their positions, the Judges will assume their duties knowing too well that they don't have to fear any authority or branch of government in dispensation of justice.  The future of legal justice in Kenya looks indeed very interesting.
Lagt inn av Dr. Stephen Kabera Karanja kl. 11:20 No comments: