This year’s Mashujaa Day Celebrations started with the unveiling of a statue commemorating and honoring Tom Mboya. It took 42 years for Kenya to honor and celebrate their slain son as a hero. Mboya was felled by an assassin’s bullet in the streets of Nairobi as he came out of a chemist shop in 1969. He was killed when his star was rapidly rising in the political arena. He was tipped to be the likely successor to the first President Jomo Kenyatta.

Mboya's becomes the second of Kenyan Heros Statues, to immortalize the streets of Nairobi. The first was that of the Mau Mau hero Dedan Kimathi. As Kenyans celebrate this day today, they will remember tens of heroes and heroines whose heroic deeds have not been immortalized yet. Quite fresh in memory will be Professor Wangari Maathai who passed on last month. 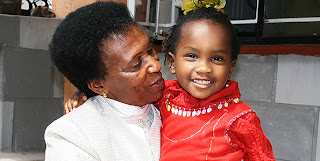 This day, however, is not only dedicated to the known heroes and heroines. It is also a day to honor the many ordinary and unsung heroes and heroines of our country who dedicate their lives to the service for their fellow Kenyans. One such heroine is Ms Ann Mwangi, featured in today's Daily Nation, who rescued a baby girl that had been abandoned in a dumpsite and has given her a new lease of life and motherly love. Mwangi runs her own Children’s home that now cares for 17 children. 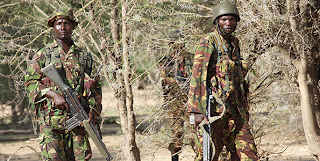 Also today, we should especially remember the men and women of our military who are engaged in the service of protecting our borders against terrorist acts by the al Shabaab. The success of their mission depends on our unequivocal support at this critical moment. Before sending the military to fight the al Shabaab terrorist group, Kenyan borders and sovereignty was violated time and again by insurgent groups from neighboring countries. This action, regrettable as it is, should be a reminder to our neighbors that peace demands dual respect of territorial integrity of your neighboring countries. This is not a war against the Somalia people who cherishes peace and have been supported by Kenyans for many years as they fled their country but it is against the evil groups that have made their country ungovernable.
Lagt inn av Dr. Stephen Kabera Karanja kl. 11:45 No comments:

Wangari Maathai - Your Legacy Lives On!

Professor Wangari Maathai though gone she lived a life full of achievements and controversy and will be remember for decades to come. She dominated the Kenyan political arena like no other woman has ever done. She also scored many firsts in her life: The first woman to attain a Doctorate degree in Kenya if not East Africa; The first Woman with the title Professor in Kenya; The first woman to be awarded the Nobel Peace Price in Africa; only to mention the most prominent achievements.

In controversy she was as elegant as in her achievements. She shook the political scene when she opposed the building of the tallest building in Nairobi Uhuru Park by the KANU government of Former President Moi. No amount of insults and harassment by the government could deter her. Through her campaigns, she drew massive support locally and internationally that finally compelled the government to relent and abandon the project.

Wangari Maathai did not shy from controversy especially when she believed in the goodness of the cause. In 1992, she joined and supported the Mothers of political prisoners who had camped in the Uhuru Park Freedom Corner when other prominent women in Kenya could not dare. For this and her numerous political, social and economic struggles makes her the Heroine of the Second Liberation in Kenya.

Wangari Maathai, however, will be remembered most for her love and struggle for the environment. Her Green Belt Movement and tree planting campaign will live forever.

The greatest tribute we can bestow Wangari Maathai is whenever you see a tree, remember Wangari. At the same time, whenever we  plant a tree in her honor we will perpetuate her legacy.
Lagt inn av Dr. Stephen Kabera Karanja kl. 10:45 1 comment: